Tesco Has Finally Found A Buyer For Fresh & Easy 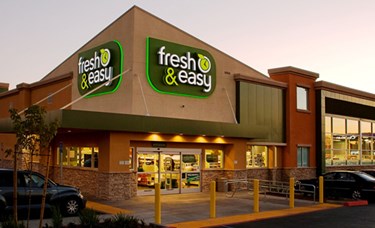 Fresh & Easy Neighborhood Market has found a buyer after being on the market for the better part of the last year. Yucaipa, owned by billionaire Ron Burkle, will acquire 150 of the hybrid supermarket and convenience stores at cost of about $235 million. The agreement was reached between Yucaipa and Tesco — the United Kingdom-based parent company of Fresh & Easy and the world’s third largest retailer in terms of sales.

Tesco will not receive any money in the transaction. It is essentially giving money to Yucaipa to take on the liability of Fresh & Easy. Tesco will be giving Yucaipa 4,000+ employees in addition to a $126 million loan. Yupaica will also inherit Fresh & Easy’s distribution center and production facility, located in Riverside, CA. The transaction comes almost a year after Tesco indicated it wanted out of the U.S. market, due to Fresh & Easy posting five years of losses totaling more than $1.5 billion. Tesco’s CEO, Phillip Clarke says the move, “offers us an orderly and efficient exit from the U.S. market.”

Tesco entered the U.S. grocery market in 2007 with Fresh & Easy Neighborhood Market, targeting the nation’s Southwest corner — Arizona, California, and Nevada. The timing to enter the U.S. market could not have been worse for Tesco, as that segment of the country was hit particularly hard by the economic recession and housing bust.

The store’s format followed that of a small supermarket combined with a convenience store. Philip Zahn, a retail analyst at Fitch Ratings, says Fresh & Easy may have been a little bit ahead of its time, “It wasn't presented in a way that's enticing to people here, because the U.S. market is so different than the U.K.” It seems that the American consumer never really became acclimated to the ready-to-eat selections or the chain’s only available checkout, which was self-service as the chain’s direct competition is larger grocery stores, offering wider varieties of food, and plenty of available staff.

The U.S. isn’t the only market troubling Tesco. Last June, the company made plans to exit business in Japan. Tesco is also developing a partnership with China Resources Enterprise, in Hong Kong, which could ultimately mean Tesco’s disappearance from China after nine years.

The industry as a whole is undergoing changes, as grocery retailers strive to find ways to compete with big retailers, like Walmart and Target, who have jumped into the grocery market. Some grocers are focusing on in-store experience and service to compete, while others are focusing on a wider selection of fresh merchandise accompanied by low prices to attract customers. On September 10, grocery chain Albertson’s acquired independent grocer United Supermarkets, and all its distribution centers and subsidiary stores. The move, which is ultimately beneficial to both parties, gave Albertson’s a new avenue to expand its brand, as well as reach potential customers in new markets.