Wal-Mart Wants To Be Number One In Beer 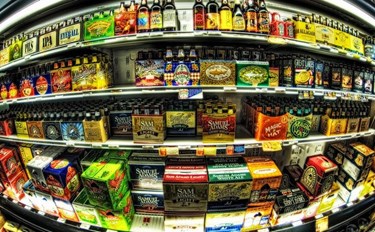 Nearly a year ago, representatives from the alcohol industry came to Wal-Mart headquarters and gathered in the Sam’s Club auditorium for an “adult beverage summit.” Attendees learned first-hand how serious Wal-Mart was in becoming a significant seller of alcohol when Wal-Mart execs stated they wanted to essentially double adult beverage sales by 2016.

Since last September, Wal-Mart has engaged in beer sales — a market in the U.S. worth around $45 billion — like never before. The retail giant has doubled its alcohol buyers, now totaling 12, and offered discounts on both mainstream and “craft” beers. They have moved so aggressively into the market that beer has made its way into Wal-Mart’s Garden Centers, and new stores’ designs display alcohol as a sales centerpiece. Customers have noticed the change, and so have workers of the beer industry, or as Wal-Mart refers to it, the adult beverage business. “They’ve said they want to be the No. 1 beer seller in the world,” Cameron Smith, the president of an executive search firm that works closely with Wal-Mart’s supplier network, told Bloomberg News. “They’re getting there quick. Everyone in the supplier community is on cloud nine.”

Even though Wal-Mart has sold beer (in states where it is allowed) since its super-centers were opened in the 1980s, it has never focused on the product like it is doing now. Sam Walton, Wal-Mart’s deceased founder, was adamantly against excess drinking, which might explain why Wal-Mart never made big pushes into beer sales. Now, Wal-Mart sees an opportunity to gain a portion of the market, and they are taking it. “Wal-Mart hasn’t been a huge beer player compared to others,” says Eric Shepard, executive editor of Beer Marketers Insights. “I assume they’re hurting everybody when they sell more of anything.”

Thus far, Wal-Mart appears to be happy with the results of its push into beer and alcohol sales. They have not released any sales figures, yet, but according to Deisha Barnett, a Wal-Mart spokeswoman, “feedback has been very positive and relationships with distributors have been very collaborative.”